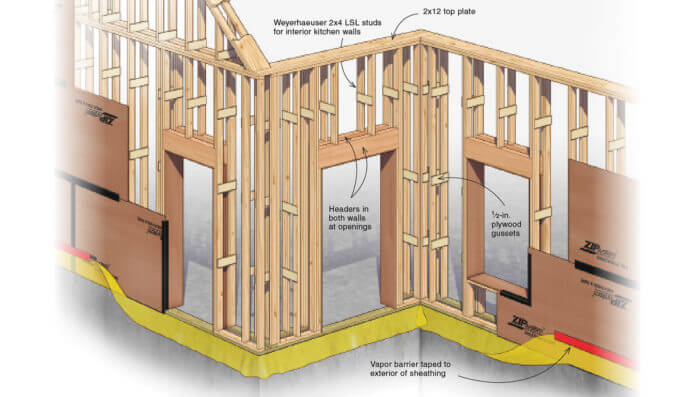 Home builders are always looking for ways to make homes more energy efficient. They know buyers and homeowners expect their houses to be modern and up to date with all the latest build technology. All of this must come while managing costs to keep the costs of houses and commercial buildings within expectations.

Putting costly components into homes drive up the costs and push potential buyers away. One technology that has become very popular over the last few decades is double stud walls.

They work so well that they’ve become the standard in most modern homes built today. Here’s a look at what double stud walls are and how to install them.

What are Double Stud Walls?

Double stud walls are exactly that, walls with two layers of studs in them instead of only one. The two studs have a certain amount of space between them, depending on build plans, to allow for better insulation. The extra stud acts as an exterior barrier to rain, wind, and other effects of climate that homes and offices have to deal with daily.

The wall cavity in between the studs is often filled with dense-packed cellulose. The outer layer is sheathed and finished just like a single stud wall would be. Only the builders will know the reason as to why the house manages energy so well.

Some of the Benefits of Double Stud Walls

First of all, double stud walls are relatively affordable. Installing an extra stud layer during the building phase doesn’t complicate plans that much and doesn’t require a great deal of additional labor. One of the greatest benefits of double stud walls is that they manage climate so much better than single studs.

The cavity filled with insulation keeps things warm in the winter and cooler in the summer. It helps air conditioning work faster and lower energy bills because HVAC doesn’t have to work as hard. Double stud walls also keep drafts out.

The wind has to fight through two layers as well as the insulation. In addition, double studs keep things quieter. This is great news for homes and offices in close proximity to one another. Double studs inside noises in and outside noises out.

Installing double stud walls is straightforward enough. Obviously, if the build job has special requirements, it will require special materials. However, for most jobs double studs will be working with basic 2×4 studs that are eight feet long.

Keep in mind, though, that with double stud wall framing, the top and sole plates need layers wide enough to handle the distance.

They’ll need to cover both stud layers and the cavity between them. A lot of builders use plywood or oriented strand board to handle this aspect of installation.

Once you’ve got all your materials, it’s time for assembly. The process is much the same as building a single wall. Build out the frames on the floor and then lift it up into its marked vertical position. Do the same for the other layer and you’re don’t with the stud frames.

The plates are where most of the work will come in. The plate boards will need to be aligned along the outer edge of the top and bottom plates. These boards help keep the plates rigid and are also spacers for stud location.

A nail gun needs to be used to get the paces into their plates so that the studs can be located later on. Be careful that each nail is sized correctly so they don’t penetrate through either of the plates.

Once the plates are on, they will need to be raises. It’s almost always necessary to have an assistant on hand to help lift the studs and place them correctly.

They can also hold the studs in place while someone else uses the nail gun. This can help avoid a lot of user error that happens when people try to do things alone.

Each exterior wall is built from parallel stud walls. The two layers of studs are filled with insulation, and then the outside layer is sheathed and completed like any other structure would be.

Here are a few things to keep in mind regarding installation:

Rain-screens are an important detail to think about with siding. It’s recommended so that the home or commercial building is best protected from outside water damage.

Installing two separate sill plates on each stud layer is easier and offers greater energy control. Of course, a single sill plate will do fine. Shared sill plates work better for framing on a slab foundation that’s insulated. It can also make roof and floor trusses easier to install.

When the thickness of a double stud wall changes, it affects the R-value of the structure. The dense-packed cellulose insulation that can fit inside the cavity space needs to be factored in to how far about the studs should be.

If you have a certain R-value goal in mind, it’s important to calculate how much space between studs is needed. Traditionally, the more complex the build, the further apart the stud layers will need to be.

Managing air penetration into a structure is a lot easier when dealing with a single stud wall. Double studs mean builders need to be more vigilant on sealing to energy efficiency is maintained.

Most of the time airtight drywall will suffices, but in colder climates, think about adding a layer of polyethylene to keep things sealed. Make sure all joints, corners, and openings are taken care of. Duct openings, outlets, and other holes are prime targets for air to seep through and negate the benefits of double stud walls.