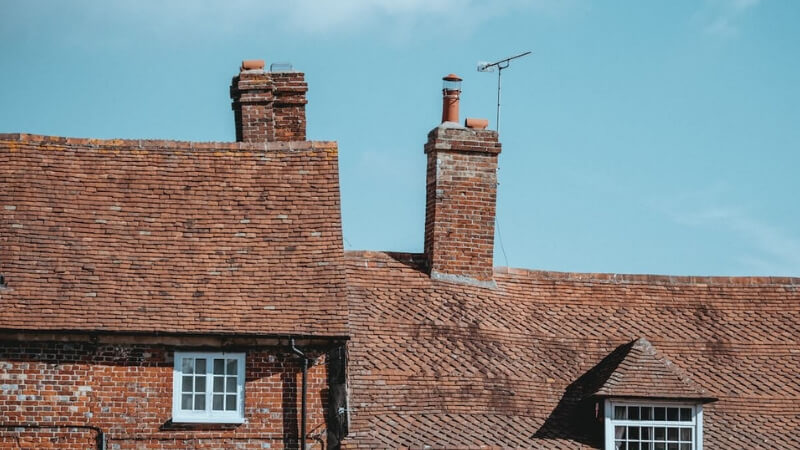 A working chimney is one of life’s simple pleasures. Over the years, real chimneys have been replaced in new homes by faux chimneys with fireplace facades.

Sometimes, newer houses use gas-powered fireplaces to imitate the coziness of traditional chimneys. There are a lot of reasons for the trend. Chimneys are disappearing because they require maintenance that people who work busy schedules out of the house are unable to keep up with.

More and more people live in condos and apartments where space comes at a premium. There are also more concerns from builders over fire risks when homes are in close proximity to one another. Still, recently DIYers and home buyers around the country are bringing back working chimneys.

The experience of a real fireplace is hard to match. There’s something so romantic and warm about enjoying a wood-burning fire on a cold evening. Whether it’s by yourself or with friends or family, staring into a fire with a wine glass or a hot cocoa in your hand is one of life’s greatest pleasures.

How does a chimney work?

Understanding how chimneys work and what maintenance is required helps prepare homeowners when they buy a house. They go into the purchase understanding what it will take to operate and tend to the fireplace.

Knowing how a chimney works also helps people fix problems when something isn’t working right. Here’s a breakdown on how chimneys work and what to look for.

It’s All about Airflow

The entire premise of a chimney is based on the principle that hot air rises and cold air falls. In order for the chimney to work well, a draft needs to be created inside it.

Additionally, if the chimney is taller, the draft will also be greater. The chimney helps draw cold air out of the house faster than the ways it normally leaks out.

Typically, cold air finds its way out of a house through floorboards, cracks in windows, or under doors. Chimney drafts create airflow that acts like a vacuum, sucking out cooler air and making the house warmer.

Pressure Plays a Big Part Too

Somewhere among the unseen air molecules floating around your house is the Neutral Pressure Plane. The plane is an invisible line drawn somewhere in the house where above it the pressure is a little greater than the pressure outside.

Underneath the plane, the pressure is lower than outside air. The plane isn’t fixed, it moves when temperature and other conditions in the house change. When a fire is on in the fireplace, the pressure inside rises, and forces air up and out through the chimney into the lower-pressure outside air.

Many times, when the chimney just doesn’t seem to be working, it’s due to challenges getting indoor air pressure right. Problems with air pressure make creating a steady draft difficult. Things like dryers, mechanical fans, leaky ducts, or anything else that affects indoor airflow can disrupt fire drafts.

The Various Parts to a Chimney

Over centuries of building design, chimneys have become much more complex. They are no longer a simple straight hollow column where air moves up and out.

Nowadays, chimneys have flues, flashing, a crown, a cap, and other components that help it work better and faster. Most chimneys these days are prefabricated, so they operate generally with the following parts.

Dampers – Chimneys always come with a removable metal plate called a damper. When the damper is open, smoke and air can move from the fireplace up into the chimney and to the outside. When it’s closed, practically no air can get through.

People open the damper when they’re about the start a fire, and close it when it’s not in use. Keeping the damper closed helps prevent cold, low-pressure air from outside from seeping into the house.

Flue- Flues are another metal plate typically located up inside the chimney. It can usually be opened and closed by pulling a metal chain that extends the length of the chimney.

The flue works like an additional layer of sealing to keep cold air out when the fireplace isn’t being used. It also helps keep birds, rodents and other animals from nesting inside.

Liners- Liners are installed in chimneys to stop the materials around the chimney from getting too hot. Homes actually have a lot of flammable materials inside of them, so the liners keep the hot air isolated to the chimney. Flue liners are often made from aluminum, steel or clay.

Chimneys work best when they are properly maintained and cleaned on a schedule. When left unattended for too long, oils and gases can build up inside chimneys that can catch fire. Regular cleaning is the best way to reduce chimney fire risk.

Professional chimney sweepers have the tools and expertise to spot dangerous chimney conditions and rectify them. They can keep homeowners worry-free knowing their chimneys are well taken care of and working properly.

Most chimney sweep companies recommend that cleanings take place at least once a year. They’ll also be able to make sure there are no obstructions inside the chimney that are stopping it from creating an ideal draft.

Fireplaces create memories that last a lifetime. Gathering around a warm fire with friends or family after a long day is one of the most relaxing, calming experiences to be had.

It brings people in tune with nature. Fireplaces and well-functioning chimneys are also great because they help cut down on utility cost. Starting a wood fire is much cheaper than artificially warming a house.

Owning a fireplace is one of the perks of a great home. All it requires is some basic understanding of chimney operation to keep you loving your fireplace for years on end.