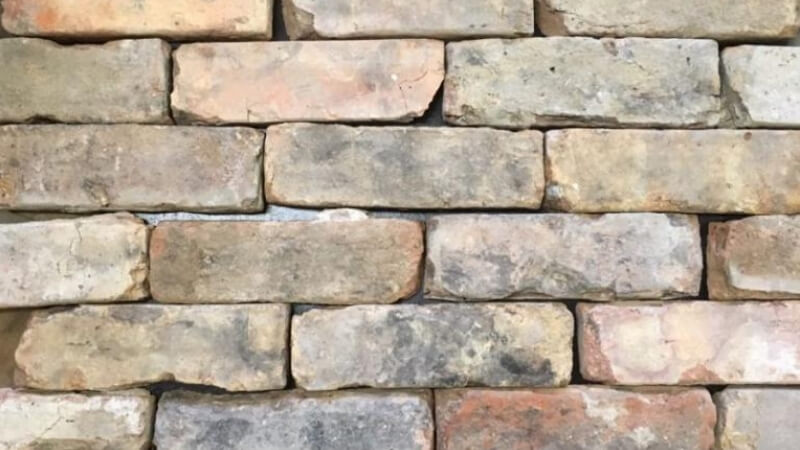 Reclaimed Chicago bricks are some of the most sought-after antique bricks on the market. Most people love this type of brick because they give buildings elegance and age well.

Builders have been using reclaimed brick for years because of their reliability. Reclaimed bricks all come with individual pockmarks, lines and other characteristics that when put together make a building’s exterior one of a kind.

People who love style and originality want something different than the uniform look of factory-made bricks. Reclaimed Chicago bricks have a special place in the country’s history and have become a hot item because of their look and quality.

How You can Verify The Reclaimed Chicago brick is Authentic

So how can you tell when you’re looking at a real Chicago reclaimed brick? The Great Chicago Fire in 1871 destroyed over four square miles of the city. Buildings were reduced to rubble. After the fire the city decided to rebuild mainly using brick. The bricks were made locally using a distinct gray-blue clay that turn salmon or buff after being fire in the kiln under intense heat.

The Illinois Brick Company was famous for making the unique style of brick, but closed operations in 1970 after the Environmental Protection Agency passed new regulations.

Whenever a Chicago historical building is demolished, its bricks are salvaged to preserve a piece of the city’s great history for use in other construction.

The great thing about reclaimed Chicago brick is that it stands out from typical factory-made bricks. It’s impossible to manufacture the wear and tear that becomes part of the bricks from decades of use.

A lot of the reclaimed bricks also come with a union stamp on them.

Working with a reputable brick dealer is the best way to make sure you are buying authentic reclaimed Chicago bricks. They source their bricks from reliable vendors and make sure only the best quality gets passed on to customers.

There are four main styles of bricks from Chicago, often referred to as Chicago common brick. Most denote the brick’s color or texture.

The variety helps builders choose reclaimed bricks that fit most styles and color schemes. Different dealers will refer to different shades and makes of reclaimed Chicago brick by different names, but most of them can be broken down into the following categories.

Chicago Common Pink – Pink brick was manufactured from the 1800’s through the mid-1900’s. They are highly-valued and come in shades of pink, light salmon and earthy colors. Most builders choose pinks for stylish interior projects or new construction. They are best suited for use in warm climates.

Full-Range – Full-range bricks include the widest variety of reclaimed Chicago brick when it comes to color and texture.

Full-range is typically the most common type of Chicago common brick and are often used in buildings looking for a unique exterior. These bricks are identified by their rough texture. Their colors are like common pink bricks but have more worn edges and pockmarks. A lot of builders use sand buff and pink bricks for interior accent walls.

Common Buff – These bricks have a really weathered look that comes in light yellow to tan buff colors. They’re very popular in fireplaces, driveways and other outdoor projects. Again, they do best in warmer areas.

Handmade – These are the oldest Chicago bricks that can be found in quantity. They were made between 1880 and 1890 and come in a wide range of colors and shapes. The handmade process made each individual brick different.

Find a Dealer that can Deliver

There’s a lot to know when you decide you want to use reclaimed Chicago brick on a new construction project or to remodel something on an existing building.

Finding the right dealer is the most important thing that can be done to make sure you get the right materials. It will have a big impact on the quality and variety of brick delivered.

Some companies can source projects from the same demolition that means bricks delivered will be consistent in color and shading. The decades of uniform aging on the now-demolished building will remain in the new structure.

Brick has been the most popular choice for style and elegance in buildings for decades. They are easy to repair and replace and stand up well to wear and tear from weather.

Using reclaimed bricks is a great way to make sure your home or building is original. The aged look from reclaimed materials is something a lot of companies spend tons of money to replicate.

By using reclaimed brick, you can instantly install a unique piece of history into your home.

Reclaimed brick is also an environmentally friendly way to build. It’s essentially recycling a building and cutting down on waste and carbon emissions.

You also avoid having to rely on companies extracting fresh clay and other building materials used to make new bricks.

If you’ve every walked through the historic district of an old city or town, you’ll see the distinct brickwork that sets those buildings apart from cookie-cutter homes that dot the country today.

It’s almost as if you can feel what is was like to live there over a hundred years ago. The homes have an air of historic significance and durability lacking in today’s industry.

Whether it’s using reclaimed brick for an entire new construction project or to add one of a kind accents, they allow us to preserve a piece of history. Reclaimed Chicago brick is a reminder that one of America’s greatest cities rebuilt itself in the aftermath of tragic fire.

They add style and substance to any home with their unique look and feel.